RENÉE ZELLWEGER turned heads on the pink carpet at the ODEON Leicester Square Premiere of Bridget Jones’s Baby for all the right reasons, looking stunning in a navy dress with a thigh-high slit.

Supported by an all key cast including Colin Firth, Patrick Dempsey, Emma Thompson and Sally Philips (complete with leg in a cast), Zellweger rightfully stole the show.

Bridget says as she walks over Westminster Bridge.  And it’s true.  Granted, things have changed.  She’s thin (we address this immediately) and she looks fantastic.  She’s also on her way to a funeral (spoiler alert; it’s Daniel Cleaver’s – apparently Hugh Grant didn’t like the script). This is grown up stuff, Bridget 2.0. Like Bridget herself, this film has it’s flaws, but that’s what makes us love it.

It’s still fair to say however that 43 year old Bridget faces a very similar set of life challenges to 30 year old Bridget.  Her relationship with Mark Darcy is over and she is single once again. Bridget’s sexist boss has been replaced by a ruthless over achieving 20 something with unique fashion sense, and Shazzer, Jude and Tom are all now parents with slightly questionable parenting skills. 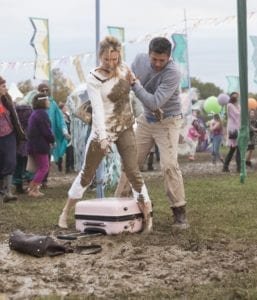 Here she meet dreamy relationship guru Jack (Dempsey), in circumstances that we can only dream of whilst plastered and knee deep in mud.  A night of passion later, followed by one with old flame Darcy, and Bridget discovers she’s with-child. Not v. good.

What follows is a Mamma Mia style “who’s the father” farce with Emma Thompson stealing the show as deliciously droll doctor – little surprised as she co-penned the script.  Jim Broadbent and Gemma Jones return as Bridget’s good natured parents, though deserve far more screen time than they get.

Does Bridget get her happily ever after….?

As Absolutely Fabulous did, this movie not only recognises that times have moved on, but embraces it.  Bridget was a relatable 30 year old, and she is a 40 year old.  She’s still clumsy and charming. At times I struggled to believe the multiple heartthrobs fighting over her however I did in the two previous movies.  And as for Zellweger, yes she might look a bit different (some scenes more than others) but old Bridget is still in there.  This is a proper rom-com, like the “good old days”.  It’s big, bold, and it’s funny.  And whilst I take issue with our eternal single girl having to finally finding happiness with a husband and child, it’s FUN.  And it gives us all a little bit of hope.

Bridget jones is out in cinemas from today.