Are we letting our creativity die as adults?

Another great press release landed in my inbox from Ginger Comms this week. It claims that ‘Modern Brits are letting their creativity die,’ which resonated quite strongly with me. Growing up in Haverfordwest Wales, creativity was celebrated. I sang in Tasker Milward school’s choir and played the clarinet in the orchestra. Pencil crayons were my favourite – I loved drawing so much I took GCSE Art in my lunch break. I recently found some of my old pics below. My childhood was spent with my head in books and writing. Even after University, I wrote for a number of Entertainment magazines. This, however, all stopped when I moved to the city. 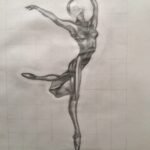 A staggering 63% say they have let their talents fall by the wayside, according to a new BIC® study. Researchers took a detailed look into the nation’s creative talents, aspirations and regrets. It revealed 1 in 5 British adults, over the age of 30, have abandoned a flair they have for something creative.

Are the internet and social media really to blame?

According to this research, the internet and social media are largely to blame. 85% admitted it is simply easier to switch on phones and computers, rather than pick up a pen and paper. Personally, I think the whole age of blogging has reinvigorated people’s love of writing. Designing for social media and the web is a skill set in itself.

Busy lives and hectic schedules emerged as one of the main excuses for not pursuing creative talents (26%).

Family commitments were also hailed as a reason for a lack of creative drive in 20% adults. However sadly, over a third felt they just “weren’t good at it anymore”.

A quarter of British adults said as a youngster they had a flair for writing stories. 17% said they excelled at drama and dancing.

21% of the 1,500 adults polled said they used to be able to play a musical instrument to a very high standard or possessed a great singing voice.

Remember her? She’s still inside you.

Apparently, our creativity hits its peak at age 17 with 28% of youngsters having tried to land a career that cultivated their talent. A BIC® Write and Shine competition asked budding songwriters aged 13 to 24 to hand write their own original song and received hundreds of entries.

Joanna Hollins, Head of Marketing for BIC® who conducted this research commented: “It’s a shame that so many adults who harboured talents as youngsters haven’t pursued them into adulthood. We believe it’s really important to support the next generation of writers and artists, which is why we launched the BIC® Write and Shine competition, to give a young songwriter a foot in the door of the music industry.”

Joanna Hollins concluded: “Whilst it’s easy to understand how the daily grind and our busy lives take over, if you genuinely have a gift for writing songs or stories, drawing or playing an instrument, it should be encouraged. It would be great to see more than 28% of the population trying to pursue a career that cultivates their talent.”

What creative talents are you neglecting?

Starting brokegirlinthecity.com was an opportunity for me to start writing again. I decided to turn my experiences of the city into a cheeky guide for other girls, living and working in the city. Whether this was through showcasing entertainment ideas, offering budget and finance advice, or simply offer supportive features on how depression, anxiety, loneliness can also affect our lives.

More recently I have been introduced to a photography. I was lucky enough to assist on the Dare Workshop for two days this year; my first foray into the magical world of photography. Hosted by professional photographer Gary Lashmar who runs Marshal Gray Photography this was the first time in years I had made space in my life to be creative, other than writing.  It doesn’t matter how experienced you are, it’s always good to keep learning. Don’t be put off – it was the first time I had ever used a real grown up camera! Not only is it a fantastic way to learn something new or perhaps reinvigorate a passion, you can also get to meet totally amazing people too. Get in touch if you would like more details.

You save up for so many things in life, but investing in yourself is something you tend to overlook. I highly recommend it.

Time to get a new hobby?

I lost count of the times my Grandfather told me I needed to get a hobby when I moved to London. It does seem sad that we spend all of our youth cultivating and celebrating our talents, but then in later life, lose sight of what makes us happy.

So what talent do you have that you haven’t nurtured in years? Fancied trying something but never got around to it? Don’t let money (or the lack of) hold you back. The website is awash with free tips on how to do anything you set your mind to. Invest in yourself. Why not open a little savings account and save a little a week to get started. Good luck!