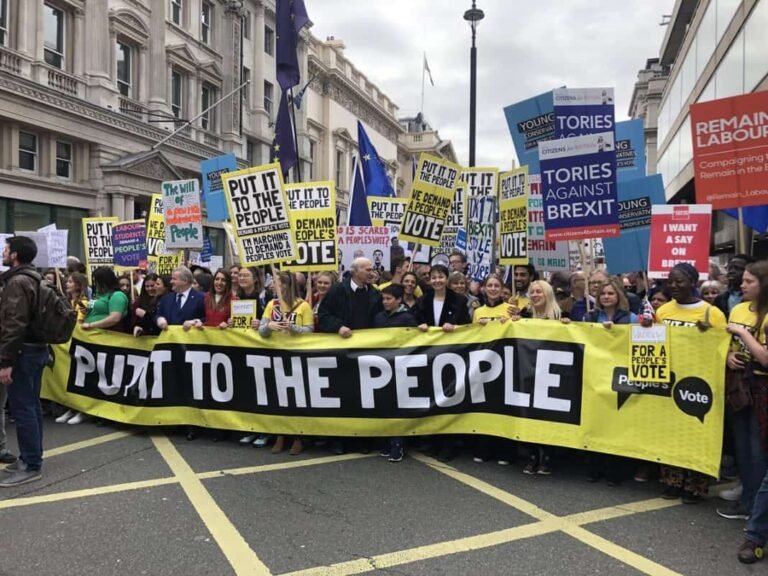 BREXIT. There I have said it. I have attempted to keep Brexit out of this blog to some extent so far. The news is so depressing at the moment, with Brexit constantly stealing the headlines. We are always at the effect of decisions made about Brexit. I wanted this blog to be a safe haven. A from the battle which rages in Britain dividing friends, family and work colleagues. Who would have thought when Cameron took this to the people vote so many moons ago. How much chaos and divisiveness the final end result would cause.

Thousands of protesters are set to march on Parliament to demand the public is given a final say on Brexit. Following the People’s Vote March which attracted 700,000 protestors back in October. Today’s “Put it to the People March” will attempt to put further pressure on the government. Hoping to give the people a final say.

Campaigners will meet at Park Lane, central London at midday. The People’s Vote Protest march will continue along Piccadilly, onto Trafalgar Square and via Pall Mall. P Downing Street with the march ending up in Parliament Square.

Speeches in support of a People’s Vote will take place outside the Palace of Westminster from .

Under the original Brexit deadlines, today would be the last chance to take place before the UK was due to leave on March 29th.

The EU approved our request to remain for a short time while the final agreement is thrashed out.

How to get there

The nearest stations are Westminster on the Circle, District and Jubilee and Charing Cross on the Bakerloo and Northern for Trafalgar Square

200 coaches have been booked to take people into London from all corners of the UK such as Sunderland, Lincoln, Inverness, Glasgow and Truro.

“Theresa May is wilfully ignoring the fact her Brexit deal has been defeated twice by record margins by MPs. Instead of listening to this, it is now clear she intends to try to grind MPs and the public into submission with yet another vote.

“The Prime Minister talks of patriotism. But there is nothing ‘patriotic’ about voting for a deal which even the Government’s own analysis shows will make our country poorer, and which we know will leave us following rules made by others.

“Nor is there anything ‘honourable’ about trying to force a deeply unpopular deal through parliament.

“And it is not a ‘compromise’ to impose a Brexit deal which in no way reflects the promises made in 2016 onto the people of this country without allowing them to have the final say.

“That’s why, whatever tricks are played in Westminster over the coming days, and whatever bribes are offered, hundreds of thousands of people will march on Parliament on Saturday demanding it’s only fair to put it to the people.”

What do people hope for?

The campaign wants the people to be able to vote on the Government’s final Brexit deal before it is finalised.

A referendum would take months to organise and would probably need Article 50 to be extended.

Many people have been stockpiling goods for months. have already been many repercussions for the country as companies look outside Britain to set up workforces.

“The People’s Vote campaign seeks to ensure that the government’s Brexit deal is put before the country in a public vote so that we can decide if a decision that will affect our lives for generations makes the country better or worse off.

Good deal or bad deal, it’s definitely a big deal – and that’s why it should be put to a People’s Vote.”