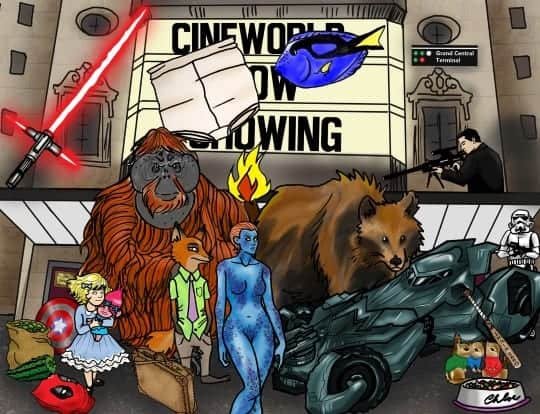 How Many Top Films Can You Spot In This Visual Brain-Teaser?

Film Quiz for you courtesy of Cineworld Cinema.

The first week back at work is always a bit difficult…even when it is a four day week. How about sending this around to your colleagues and see who performs the best!

How many top films can you spot in this visual brain-teaser?

From Trolls to Fantastic Beasts, X-Men to Captain America, 2016 was a bumper year for movies.

They were hard to miss – but how many of the 20 stars and props from the top films of the past year can you spot in this brain-teaser?

You can call yourself a proper movie buff if you can nail all 20 – including one partially obscured clue you’d need to be a real marvel to find.

Justin Skinner, SVP Marketing at Cineworld Cinemas, who created the puzzle, said: “As we get ready for another epic year of film in 2017, we’re looking back at the last twelve months of movie magic.

“We want Cineworld to be the best place to watch a movie, and whether in 2D, 3D or 4DX, IMAX, Superscreen or our VIP offering, we hope our customers will have seen many of the top titles we’ve hidden in this puzzle.

“We’re certain that film fans will agree with us that this was a bumper year for cinema, and hope they’ll have fun identifying twenty of 2016’s top titles in the graphic.

If you don’t want to cheat, don’t look below!

Fantastic Beasts and Where To Find Them

Batman Vs Superman: Dawn of Justice

The Secret Life of Pets

Animal in a suit

Girl On The Train

Alvin and the Chipmunks 4