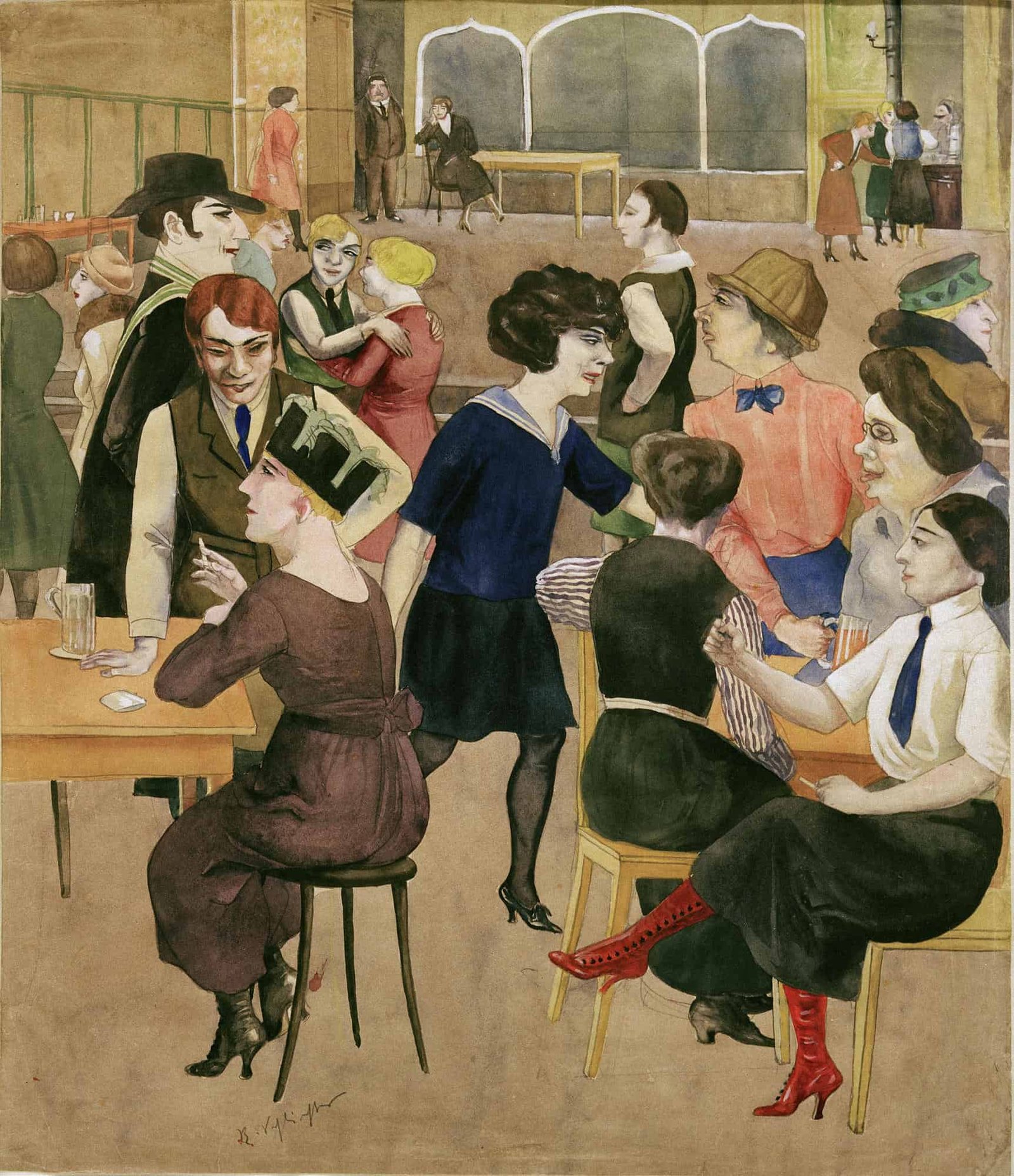 Cabarets and Clubs in Modern Art

Into the Night: Cabarets and Clubs in Modern Art – Barbican Art Gallery

Opening 4 October 2019, Into the Night: Cabarets and Clubs in Modern Art explores the social and artistic role of cabarets, cafés and clubs around the world. Spanning the 1880s to the 1960s, the exhibition presents a dynamic and multi-faceted history of artistic production. The first major show staged on this theme, it features both famed and little-known sites of the avant-garde – these creative spaces were incubators of radical thinking, where artists could exchange provocative ideas and create new forms of artistic expression. Into the Night offers an alternative history of modern art that highlights the spirit of experimentation and collaboration between artists, performers, designers, musicians and writers such as Henri de Toulouse-Lautrec, Loïe Fuller, Josef Hoffmann, Giacomo Balla, Theo van Doesburg and Sophie Taeuber-Arp, as well as Josephine Baker, Jeanne Mammen, Aaron Douglas, Jacob Lawrence, Ramón Alva de la Canal and Ibrahim El-Salahi.

Into the Night focuses on global cities

Focusing on global locations from New York to Tehran, London, Paris, Mexico City, Berlin, Vienna and Ibadan. Into the Night brings together over 350 works rarely seen in the UK, including paintings, drawings, prints, photographs, films and archival material. Liberated from the confines of social and political norms, many of the sites provided immersive, often visceral experiences, manifesting the ideals of the artists and audiences who founded and frequented them. The exhibition features full-scale recreations of specific spaces, such as the multi-coloured ceramic tiled bar of the Cabaret Fledermaus in Vienna (1907), designed by Josef Hoffmann for the Wiener Werkstätte, and the striking abstract composition of the Ciné-Dancing designed by Theo van Doesburg for L’Aubette in Strasbourg (1926–28).

Jane Alison, Head of Visual Arts, Barbican, said: “Into the Night casts a spotlight on some of the most electrifying cabarets and clubs of the modern era. Whether a creative haven, intoxicating stage or liberal hangout, all were magnets for artists, designers and performers to come together, collaborate and express themselves freely. Capturing the essence of these global incubators of experimentation and cross-disciplinarity, immersive 1:1 scale interiors will take the visitor on a captivating journey of discovery.”

Into the Night begins in Paris, on the eve of the 20th century,

Into the Night begins in Paris, on the eve of the 20th century, with two thrilling and iconic locations of the avant-garde. The theatrical shadow plays of the Chat Noir in the 1880s are brought to life through original silhouettes and works that decorated the interior of the cabaret, which acted as a forum for satire and debate for figures such as founder Rodolphe Salis, artist Henri Rivière and composer Erik Satie. The captivating serpentine dances of Loïe Fuller staged at the Folies Bergère in the 1890s were trail-blazing experiments in costume, light and movement. Henri de Toulouse-Lautrec captured her performances in his extraordinary series of delicately hand-coloured lithographs, brought together for the exhibition. Visitors will encounter the immersive “Gesamtkunstwerk” (total work of art) design of the Cabaret Fledermaus (1907) in Vienna by the Wiener Werkstätte, where experimental cabaret productions were staged. The exhibition includes original documentation of Oskar Kokoschka’s exuberant puppet theatre and Gertrude Barrison’s expressionist dance.

The Cave of the Golden Calf (1912), an underground haunt in Soho epitomising decadence and hedonism, is evoked through designs for the interior by British artists Spencer Gore and Eric Gill, as well as Wyndham Lewis’ highly stylised programmes for the eclectic performance evenings – advertised at the time as encompassing “the picturesque dances of the South, its fervid melodies, Parisian wit, English humour”.

In Zurich, the radical atmosphere of the Cabaret Voltaire (1916) is manifested through absurdist sound poetry and fantastical masks that deconstruct body and language, evoking the anarchic performances by Hugo Ball, Emmy Hennings and Marcel Janco. This is the birthplace of Dada, where humour, chaos and ridicule reign. Two significant clubs in Rome provide insights into the electrifying dynamism of Futurism in Italy in the 1920s.

A few years later, a group of artists and writers from the radical movement Estridentismo, including Ramón Alva de la Canal, Manuel Maples Arce and Germán Cueto, began to meet at the Café de Nadie (Nobody’s Café) in Mexico City, responding to volatile Post-Revolutionary change and the urban metropolis. The ¡30-30! group expressed its values by holding a major print exhibition (partially reassembled here) in a travelling circus tent open to all. Meanwhile in Strasbourg, Theo van Doesburg, Hans Arp and Sophie Taeuber-Arp worked together to create the L’Aubette (1926–28), conceived as the ultimate “deconstruction of architecture”, with bold geometric abstraction as its guiding principle. The vast building housed a cinema-ballroom, bar, tearoom, billiards room, restaurant and more, each designed as immersive environments.

Cities such as Berlin hosted cabaret and daring striptease

After a period of restraint in Germany during the First World War, the 1920s heralded an era of liberation and the relaxation of censorship laws. Numerous clubs and bars in metropolitan cities, such as Berlin, playing host to heady cabaret revues and daring striptease; the notorious synchronised Tiller Girls are captured in Karl Hofer’s iconic portrait. Major works by often overlooked female artists such as Jeanne Mammen and Elfriede Lohse-Wächtler, as well as George Grosz, Otto Dix and Max Beckmann, capture the pulsating energy of these nightclubs and the alternative lifestyles that flourished within them during the 1920s and 1930s. During the same time in New York, the literary and jazz scenes thrived and co-mingled in the predominantly African American neighbourhood of Harlem, where black identity was re-forged and debated. Paintings and prints by Aaron Douglas and Jacob Lawrence convey the vibrant atmosphere and complex racial and sexual politics of the time, while poetry by Langston Hughes and early cinema featuring Duke Ellington shed light on the rich range of creative expression thriving within the city.

Into the Night also celebrates the lesser known but highly influential Mbari Artists and Writers Club, founded in the early 1960s in Nigeria. Focusing on two of the club’s key locations, in Ibadan and Osogbo, the exhibition explores how they were founded as laboratories for postcolonial artistic practices, providing a platform for a dazzling range of activities –  including open-air dance and theatre performances, featuring ground breaking Yoruba operas by Duro Ladipo and Fela Kuti’s Afro-jazz; poetry and literature readings; experimental art workshops; and pioneering exhibitions by African and international artists such as Colette Omogbai, Ibrahim El-Salahi and Uche Okeke. Meanwhile in Tehran, Rasht 29 emerged in1966 as a creative space for avant-garde painters, poets, musicians and filmmakers to freely discuss their practice. Spontaneous performances were celebrated and works by artists like Parviz Tanavoli and Faramarz Pilaram hung in the lounge while a soundtrack including Led Zeppelin and the Beatles played constantly.

The exhibition is curated and organised by Barbican Centre, London, in collaboration with the Belvedere, Vienna.

Cabarets, Cafés, Clubs and Artists included in the exhibition:

The exhibition is made possible through support from the Swiss Arts Council Pro Helvetia, the Embassy of the Federal Republic of Germany London, the Embassy of Mexico to the United Kingdom, and a Jonathan Ruffer Curatorial Research Grant from the Art Fund.