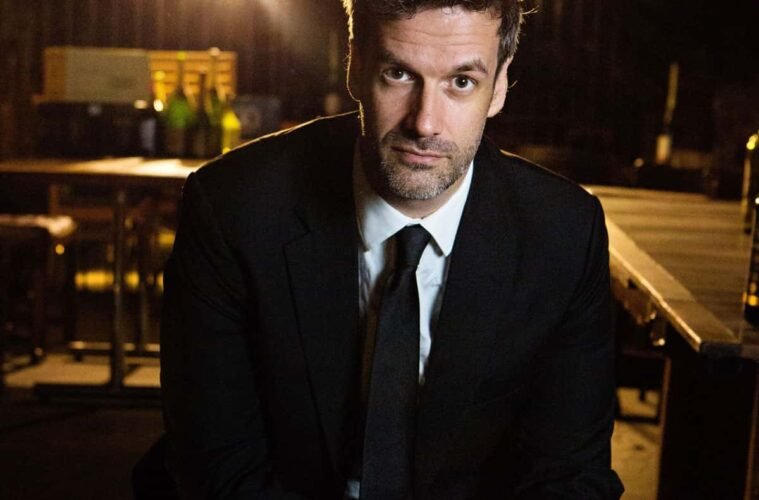 Brigstocke’s THE RED at the Fringe

“Astutely written and nicely acted… touching and real; a lovely debut” – The Guardian

Benedict’s dad loved wine. He loved collecting it and drinking it. He loved talking about it, and sharing it with friends and family was an act of love and celebration. A glass of Châteauneuf-du-Pape – or several – marked the sweet spot when the working day gently eased into a relaxing evening.

Benedict loves wine too. Benedict is an alcoholic. Sober now for 25 years, on the day of his father’s funeral Benedict receives an unsettling final bequest, a bottle of exceptionally fine red wine. Will he drink one final toast to his father?

“Potent stuff. The tightly-written conversation is gripping and the emotional depth of the events described within kept me listening intently” – The Cambridge Geek

In this his stage directorial debut, originally commissioned for BBC Radio 4, Marcus Brigstocke writes and directs a bittersweet drama of family and addiction, based on his own recovery.

Of the play, Marcus says: “This is the most personal piece of writing I’ve ever created. I am hugely proud and very excited to be able to tell this particular story, but mostly I am grateful. I’ve had a lot of help and I’m very lucky to be able to finally see ‘The Red’ on stage.

My 29-year recovery from Alcoholism (and other addictions) has been the result of a huge amount of help. I like wine. I don’t drink it (I would if I could) but I like the role it can play in a social situation. It is complex and sophisticated, wine is nuanced and subtle. Like my Dad.

I would have liked to share evenings over a bottle of wine with friends and family. I’m glad to have been able to choose not to.”

Cast-wise, Marcus is happy to announce that the parts of Benedict and his father will be played by real-life father and son Bruce and Sam Alexander. Bruce (Benedict’s father) is most known for his role as Supt. Norman Mullett in A Touch of Frost, but has an esteemed theatrical career (performing with the Royal Shakespeare Company, among others) and has starred in films including The Long Good Friday and Churchill at War. Son Sam (Benedict) has followed his father’s lead in treading the boards at the RSC, having lead roles in plays including Love’s Labour’s Lost and Much Ado About Nothing. He has also graced the big screen, in films such as 45 Years and An American Haunting.

Set and costume design is by Alex Marker, with lighting design by Damian Robertson.

Marcus Brigstocke’s talent was noted early on in his career in 1996 when he won the BBC New Comedian Award at the Edinburgh Festival. He is now regarded as a major comedy, writing and acting talent, performing stand up nationally to sell-out audiences on several tours. He has also found himself treading the boards of the West End, most notably in Monty Spamalot and The Railway Children.

TV-wise, Marcus is a master of satirical comedy, with an impressive list of credits including his role as team captain on Argumental (Dave), and host of The Late Edition and I’ve Never Seen Star Wars (BBC4). Other appearances include Live At The Apollo (BBC1), Have I Got News For You (BBC1), Mock the Week (BBC2), QI (BBC2), Sorry I’ve Got No Head (BBC1), The Late Edition (BBC4), and the 11 O’Clock Show (Channel 4).

BBC Radio 4 has become somewhat of a second home to Marcus Brigstocke, with regular appearances on I’m Sorry I Haven’t A Clue, The Now Show and Just A Minute. Marcus has also written and recorded three series and four specials of his hit show Giles Wemmbley-Hogg Goes Off. Most recently, he co-wrote and co-starred in the new BBC Radio 4 sitcom The Wilsons Save The World.