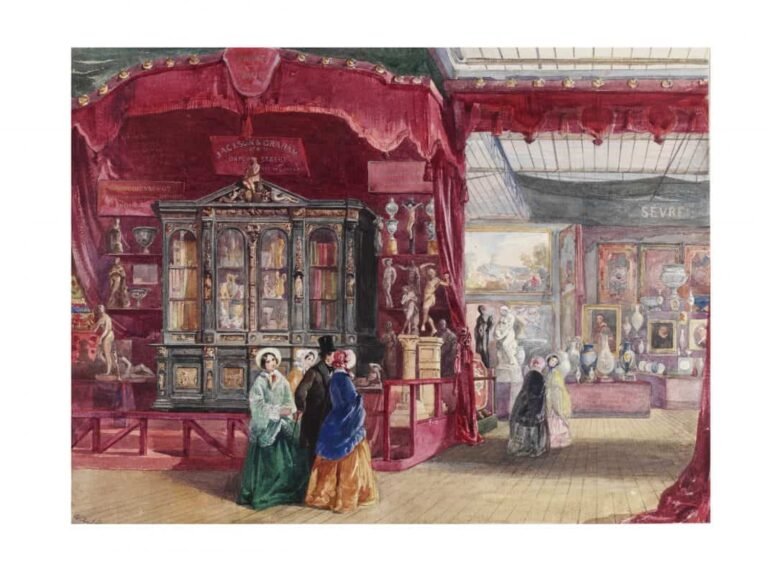 This year the Victoria and Albert Museum (V&A) will celebrate the 200th anniversary of the births of Queen Victoria and Prince Albert. Crowning the V&A’s celebrations will be Queen Victoria’s iconic sapphire and diamond coronet, going on permanent public display for the first time in the V&A’s William and Judith Bollinger Gallery from 11 April 2019. Two temporary displays will reveal the crucial role that the royal couple played in the formation of the V&A, alongside a dedicated bicentenary events programme and new publications.

Story of the V&A

The story of the V&A is closely linked to Queen Victoria and Prince Albert. The museum’s origins lie in the Great Exhibition of 1851, devised and championed by the Prince. Following the Exhibition, Albert ensured its profits were used to create a cultural district of museums and colleges in South Kensington devoted to art and science education. The South Kensington Museum (as the V&A was then known) was opened by Victoria and Albert in 1857, and in 1899 was renamed the Victoria and Albert Museum. It is one of my favourite places in London and I can’t wait for to see this.

The highlight of the V&A’s bicentenary celebrations will be Queen Victoria’s sapphire and diamond coronet going on permanent public display for the very first time. Following its acquisition through the generosity of William & Judith, and Douglas and James Bollinger as a gift to the Nation and the Commonwealth. One of Queen Victoria’s most treasured jewels, it was designed for her by Prince Albert in 1840 – the royal couple’s wedding year. Albert played a key role in arranging Victoria’s jewels, and he based the coronet’s design on the Saxon Rautenkranz, or circlet of rue, which runs diagonally across the coat of arms of Saxony. In 1842, Victoria wore the newly completed coronet in a famous portrait by Franz Xaver Winterhalter, which carried the image of the young queen around the world through replicas, copies and engravings. Over twenty years later, Victoria wore the coronet instead of her crown in 1866 when she felt able to open Parliament for the first time since Albert’s death in 1861, with her crown carried on a cushion.

Prince Albert: Science & the Arts on the Page

Opening 2 April, the display Prince Albert: Science & the Arts on the Page on the V&A’s Library landing will examine Prince Albert’s personal contributions to the library’s collections during his lifetime. Displaying and photographs that have never been assembled before. One volume presented by the Prince contains a letter, written on his instruction by his librarian Ernst Becker, highlighting Albert’s wish to promote knowledge and learning in science and the arts. The display will also include a published volume of songs written and set to music by Albert and his brother, featuring amendments in Albert’s own hand, as well as his signed season ticket to the Great Exhibition of 1851.

For the first time Victoria and Albert’s Museum: A Bicentennial Display, opening 13 May, brings together objects that the royal couple presented or lent to the V&A, shining a light on the museum’s own Victorian ‘royal collection’. Early watercolours show Prince Albert’s vision for South Kensington, the museum in its first home of Marlborough House, and designs for the South Kensington Museum, while early photographs of objects reflect the character of the foundation collections.

Tristram Hunt, Director of the V&A, said:“The V&A owes its origin to the visionary impulse and sustained support of Prince Albert and Queen Victoria.  In this anniversary year, we are delighted to be honouring their memory and celebrating their legacy with acquisitions, activities, and academic conferences across the museum.” A range of new publications will also celebrate the bicentenary of the births of Queen Victoria and Prince Albert, includingCreating the V&A: Victoria and Albert’s Museum (1851–1861). Written by the V&A’s Julius Bryant and published by Lund Humphries, Creating the V&A reveals the highly instrumental role the young couple played as both public supporters and large-scale lenders before the museum had its own collection. Also new in 2019 will be a revised edition of Clare Phillips’Jewels and Jewellery, published with Thames & Hudson, which features the coronet on the cover, and V&A Introduces: Queen Victoria, published with Puffin, a vibrant mini-hardback for children.

From 28-30 June 2019, the V&A will also collaborate with other organisations across Albertopolis to stage the Great Exhibition Road Festival, evoking the spirit of the first Great Exhibition in 1851.

Queen Victoria’s sapphire and diamond coronet will go on permanent public display in the William and Judith Bollinger Gallery on 11 April 2019.

Prince Albert: Science & the Arts on the Page

In Prints and Drawings, Room 90, The Julie and Robert Breckman Gallery.