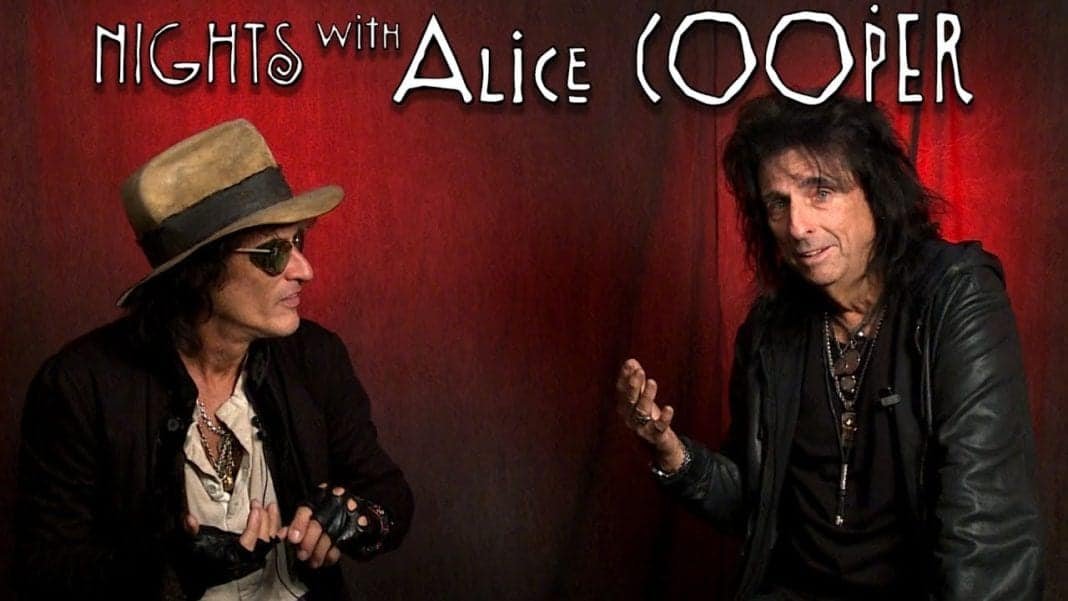 The Hollywood Vampires at SSE Arena Wembley, London – The Review

When the lights came on in the SSE Arena, at the end of a powerful 90 minute set from Rock super-group The Hollywood Vampires, many struggled to accept that the party was over. One inebriated fan was audibly bereft: “I looooove you, Johnny,” slurred a female voice from the row behind. I turned to find a voluptuous, middle-aged lady, stripped down to lace bra and panties, swaying precariously, thrusting a hand in the air. “I’m waiting for you, Johnny!” she croaked, hoping that Johnny Depp – the band’s guitarist – would somehow hear her cries from backstage.  Her voice stalled and failed, choked by the grip of beer. She tried over and over, clutching her jeans like a comfort blanket.

The surrounding crowd was streaming out of the venue, energised and still singing the closing track of the show, ‘School’s Out’. Seventy year old Alice Cooper had delivered his classic anthem as if it was his first song of the evening: as buoyant as the hundreds of giant balloons which were released, mid-song, from the ceiling. They had bounced and skimmed across the crowd as if charting every frenetic heartbeat in the arena. The rapturous audience sung along in hoarse voices, overcome with elation and gratitude. There had been something for everybody in this gig, satisfying Rock fans of every generation. The entire show felt like a flash-mob karaoke session, with chanting, screaming, beer flying everywhere and a lot of head banging.

Depp and Cooper formed the band in 2015, with Aerosmith’s Joe Perry, specifically to honour the music of deceased rock heroes who once occupied a position in Cooper’s legendary drinking circle from the 1970s. Known as The Hollywood Vampires because they gathered at night, regulars included Keith Moon and Ringo Starr, with ‘drop-ins’ such as John Lennon and Marc Bolan.

Still, the headlining trio – supported by an impressive line of touring musicians – looked beyond resurrecting old ghosts at Wembley. Original material, such as the infectiously catchy ‘My Dead Drunk Friends’ and ‘The Boogieman Surprise’ brought as much delight (and crowd shenanigans) as covers of The Doors, Spirit, AC/DC and The Who.

The latter included a mesmerising drum solo from Glen Sobel: you could feel the pounding in your gastrointestinal tract. Keyboardist Buck Johnson earned every clap and whistle following an earlier turn in the spotlight and Chris Wyse’s vocal of the Motorhead anthem, ‘Ace of Spades’, impressively surfed a tsunami of cheers from the crowd. The bassist’s performance was an instant crowd pleaser, timed midway in the show to propel the audience into the second half with renewed vigour. Not that they needed a push: people screamed so loudly throughout the night, I had to turn off my hearing aids!

Joe Perry announced that he had been asked to bring the Blues to Wembley and he didn’t hold back. His version of Fleetwood Mac’s ‘Stop Messin’ Around’, along with Cooper on Harmonica, was a nod to Rock’s roots and had my soul singing in unison with my voice.  Depp’s stirring solo of the David Bowie track ‘Heroes’, shortly before the encore, may well have been the moment the woman behind me felt an urge to strip. One more solo and the gig might have ended with [beef] curtains.

Sustaining all the action throughout the night was the lifeblood of the crew: Tommy Henriksen. The vocalist, keyboardist and guitarist is a regular in Cooper’s band and powered through every number, from riffing with Depp and Perry to singing his heart out. As the band’s album producer and musical director, Henriksen seemed like the oxygen-carrying haemoglobin maintaining every Vampire on and off stage. That said, there was no stand-out star stealing the show at Wembley – it was definitely a group effort, with everyone given time to show off their individual talents.

Vampires typically require fresh blood to keep going but this group seems in fine form to continue as it is. Let’s hope so. They should swoop back into the UK very soon so be ready for another party.

Savvy music lovers looking for a head-banging night out – without breaking the bank, of course – can still get their hands on a few last minute tickets to see The Hollywood Vampires.  Fronted by the ‘Godfather of Shock-Rock’, Alice Cooper, legendary Aerosmith guitarist, Joe Perry, and multi-talented Hollywood icon, Johnny Depp, the super-group is set to electrify UK shores with a four-date rock-fest, supported by The Darkness and punk veterans, The Damned:

With a playlist blending original material with classic favourites from the likes of Motorhead, The Doors, David Bowie and The Who. The Hollywood Vampires promise a thrashing, pumping, powerful spectacle of neck-breaking body jerkers. Translation: you won’t want to sit down for a second. There’s no chance of anything less given that Cooper, Perry and Depp are joined on stage by Tommy Henriksen (guitar), Chris Wyse (bass), Glen Sobel (drums) and Buck Johnson (keyboards). Every one of these musicians can raise the dead with only half their skills but that’s no coincidence…

The Hollywood Vampires have taken their name from Alice Cooper’s old drinking circle from the 1970s, comprising rock gods who would outdrink each other for a spot in the gang. In 2015, Cooper teamed with Perry and Depp – a gifted guitarist – to use the name to create a super-group capable of honouring the music of the old guard: “dead, drunk friends” silenced by their vices only for their rebellious spirit to live on in their songs. In The Hollywood Vampires, these legends are resurrected for the modern era, finding fresh breath to speak to new audiences across the globe. If you want rock music – real rock music – this is the band for you.

Tickets and further information can be found here:

is available now, from Amazon (CD and Vinyl), iTunes and Spotify.