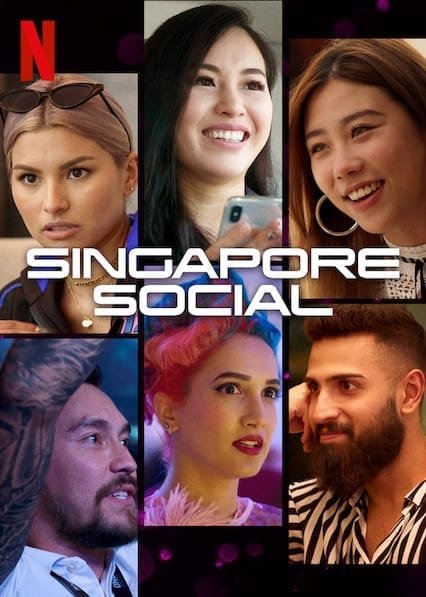 “Peer into the lives of young Singaporeans as they defy expectations and traverse the tricky terrain of career, romance and family.”

Singapore Social has been likened to Crazy, Wealth Asians but this series felt more like a Singaporean spin-off of Made in Chelsea.

The show follows the lives of a group of Singaporeans; ambitious, driven in their careers, with relationships appearing to be their biggest struggle. All are battling in some form how to assert their individuality and follow thier dreams, living and working in a traditional cultural society. The juxtaposition of traditional family values with a desire to break free is most keenly felt by Nicole and Paul.

The show is decadent with an impressive amount of partying and drinking. So much so that it gave me FOMO and I wanted to move out there to join the party!

Nicole is a female entrepreneur, who feels that she is the black sheep of the family as she set her own company looking after startups and blockchain businesses rather than follow the traditional career route. Mae Tan is a fashion blogger who is in the family business, who is looking to study in New York to break out of the Singapore circle. Vinny is a talented, charismatic film-maker who fancies himself as a bit of a player but has his ex is constantly there. Paul is a model/actor who is making the leap to move in with his girlfriend having looked after his mother after his father had died. Tabitha is a popular singer and we follow her career and love life throughout the show. Sukki who is Singapore’s first-ever Burlesque dancer performs an incredibly important show as well as pursuing a love interest overseas.

Vinny wants to collaborate with Tabitha on her upcoming music video. Paul tells Sukki that he intends to move in with his girlfriend, Joey.

3. To Happiness, Health and Good Fortune

Mae and Nicole visit a fortune-teller. Sukki’s highly anticipated dinner date with Tim gets off to an awkward start.

Tabitha shops for her music video shoot with ex-boyfriend Adam. Mae faces growing pressure from her parents to return to school.

Nicole invites Alison to poker, and he brings his parents. Tabitha asks boyfriend Louie to move in with her. Cristina critiques Sukki’s performance.

During her event, Nicole buckles under pressure in her mom’s presence. Paul catches up with school buddies but feels like he’s lagging behind.

Paul asks Mae to help spread awareness about his plastic-cleanup initiative. Vinny and Cristina confront Sukki ahead of her big show.

Alson counsels Nicole about her relationship with her mom. A surprise guest shows up at Sukki’s performance. Vinny tells Mae that he will miss her.

I have been friends with Sukki for a number of years. Sukki Singapora is Singapore’s first-ever Burlesque Dancer and is both a creative artist and campaigner to support other women. What strikes me in this show is that Burlesque is still very unknown within her social circle, as it had been illegal until recently and generally were not sure what to make of it. Sukki puts on a great performance, pushing her art to incorporate both Burlesque and Hip Hop in the show.

“We all grew up with strict traditional values, and sometimes, we just want to be rebellious” Sukki