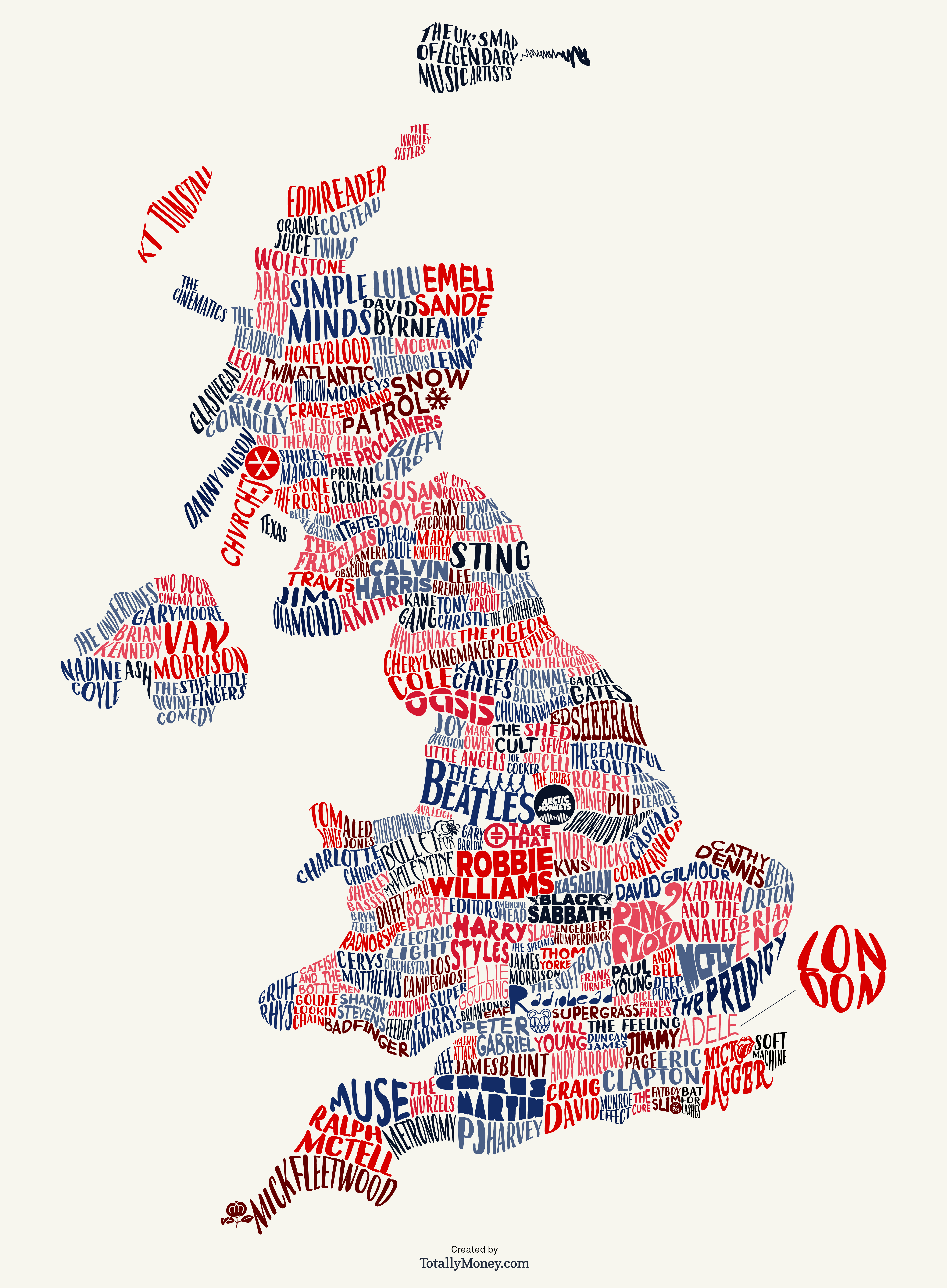 September 2017 marks the 50th anniversary of the UK’s first national pop radio station – BBC Radio 1. TotallyMoney has created an interactive map highlighting the massive involvement the country has had in the world music scene.

From classic rock bands like Black Sabbath through to boy band pop stars One Direction. The music industry makes up a colossal £4.1 billion contribution to the British economy.

Interactive map of the UK

A new interactive map of the UK from TotallyMoney shows the massive involvement the country has had in the world music scene. With classic rock bands like Black Sabbath through to boy band pop stars One Direction making up the colossal £4.1 billion contributions of the music industry to the British economy.

From the launch of the station in 1967, Radio 1 has been a champion for British artists and driven the careers of a number of the UK’s most popular musical exports.

In time with the influential radio station’s birthday, TotallyMoney have delved into the proud musical history of the UK and created an interactive map of the British Isles made up of the names of the top musicians from every inch of the country. See where Adele rolled in the deep, and the hill where Ed Sheeran found hill castle, and the crowded place where James Blunt saw her face. Alongside each artist, you can explore the number ones that rocketed him or her to the top of their game and how much money it’s made them. You can also listen to a clip from their biggest hit – just in case you needed a refresher on why these artists are so important.

‘Hey Jude’ to ‘Wonderwall’, Supermassive Black Hole to Invaders Must Die – the UK music scene has provided an immeasurable number of catchy tunes and plenty of worldwide number ones. Musicians come from every corner and Isle of Britain – from Two Door Cinema Club in the north of Northern Ireland down to Mick Jagger down in the south-east of England. This map charts the UK’s biggest musical successes spanning over 200 artists and bands, and nearly 60 years of classic British music.

You know all the lyrics, you have a dance routine with your friends for the big songs, but do you know where the artists came from? The map shows music from everywhere in the country, with 245 artists mapped out across the UK.

Check out the top five chart-toppers for number ones, and see where they came from:

“The UK music industry is one of the biggest in the world,” said Joe Gardiner, TotallyMoney’s Head of Brand and Communications. “It’s a rich history, but people often think that musicians just congregate in London. Music is universal – singers and bands come from all over.”

View the full interactive map or the infographic version here.