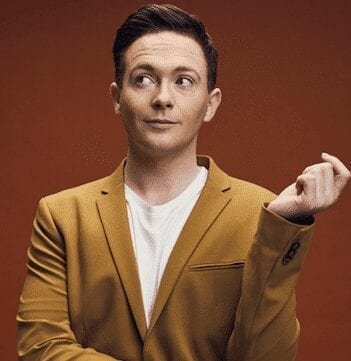 Every year I have wanted to go to the Edinburgh Fringe to see Stephen, who i used to live with when he first started out in comedy. So this is the first year I am going to go! I can’t believe this will be my first ever Fringe but I am very excited about seeing Stephen. If you haven’t seen any of his shows, you really must. Stephen is cheeky, witty & quite naughty…all with a big smile and a laugh.

Everyone’s favourite ‘guilty pleasure’ (Daily Record), stand-up comedy star, Stephen Bailey returns to the Edinburgh Festival Fringe in 2018 with his brand new show ‘Our Kid’ – a story full of Northern warmth, some working-class guilt and a bit of blue.

2018 has been an exciting year for Stephen!

The past six months have seen him embark on his first critically acclaimed UK tour, perform three nights at the prestigious Soho Theatre in London plus support Katherine Ryan on her recent sold-out UK tour.  His friendly brand of gossipy humour has made him one of the UK’s most exciting up-and-coming acts in comedy at the moment.

Stephen is now the resident agony uncle on ITV1s ‘Zoe Ball on Sunday’. Appearances on Five’s ‘Celebrity Big Brother’s Bit on the Side’ and Comedy Central’s ‘Live at The Comedy Store’ add to his extensive back catalogue of TV and radio work.

Celebs on a Farm, C5

“I’m basically Caroline Flack but they’ve not sent me to Majorca, they’ve sent me to Rye.”

Stephen has also guest-hosted the Sunday Takeover on Virgin Radio, the Breakfast show on GAYDIO, been featured on The Arts Show with Jonathan Ross on BBC Radio 2 and was named one of Attitude Magazine’s Top 100 Bachelors of the Year in 2017.

As a vocal supporter of LGBT rights, Stephen regularly contributes articles to Attitude magazine, Huff Post UK and Gay Star News, which made him the ideal choice to host the Stonewall 25th Anniversary Party last year.

“Stephen’s show was hilarious from the first line, and for the whole performance I don’t think a single joke died” ***** Voice Magazine

Ticket Prices: Pay What You Want