I was so excited to attend my first media viewing of 2021 this morning at the Barbican Art Gallery. Claudia Andujar: The Yanomami Struggle is an amazingly curated exhibition dedicated to the work of Brazilian artist and activist Claudia Andujar. Not only is the Barbican one of my favourite places to go to in London. The exhibition far surpassed all expectations and the images you find here do not even begin to do them justice as displayed in the exhibition.

For over five decades starting in the 1970s, Claudia devoted her life to photographing and defending the Yanomami – one of Brazil’s largest indigenous peoples. At a time when their territory is threatened more than ever by illegal gold mining, and as Covid-19 continues to sweep the globe. This exhibition is relevant in the context of the humanitarian and environmental crises exacerbated by the pandemic.

The exhibition reflects the dual nature of Andujar’s career, committed to both art and activism

Claudia Andujar: The Yanomami Struggle is curated by Thyago Nogueira, Head of Contemporary Photography at the Instituto Moreira Salles in Brazil. Based on years of research into Andujar’s significant archive, the exhibition explores her extraordinary contribution to the art of photography as well as her major role as a human rights activist defending the Yanomami’s rights.

Over 200 photographs, an audio-visual installation, a film and a series of drawings by the Yanomami are brought together in The Curve, The Pit and the Barbican’s foyers.

Photographs from her first six years living with the Yanomami, showing how she grappled with the challenges of visually interpreting a complex culture, will be featured alongside the work, she produced during her period of activism, as she used photography as a tool for political change.

Today, a new urgency highlights a humanitarian catastrophe that is rapidly engulfing the Yanomami. Their forests, lives and livelihoods are being destroyed by illegal gold miners who are also spreading Covid-19 among their communities. A huge public outcry was fundamental in persuading the Brazilian government to recognise Yanomami land rights in 1992.

This exhibition is an urgent call to stand once more. The Yanomami people are featured in thiscampaign to protect their rainforests and way of life in the face of mounting threats and genocidal government policies.

Jane Alison, Head of Visual Arts, Barbican said: “We are really thrilled to present Claudia Andujar: The Yanomami Struggle at the Barbican this summer. The work of this inspirational artist and activist provides an unparalleled insight into the lives of the Yanomami and shines a light on the violence perpetrated against them through illegal activities, hostile forces and corporate greed. The visceral power of Andujar’s photography has never been more relevant, as the climate emergency and the impact of Covid-19 continues to threaten the Yanomami and the Amazon basin.”

Claudia Andujar first met the Yanomami in 1971 while working on an article about the Amazon.

Fascinated by this isolated community and in receipt of a Guggenheim Fellowship. Claudia embarked on an in-depth photographic essay of their daily life with the support of the Italian missionary Carlo Zacquini.

From the beginning, Andujar’s approach differed greatly from the documentary style of her contemporaries. The photographs during this period reveal how she experimented with a variety of photographic techniques in an attempt to visually translate the shamanic culture of the Yanomami. Fascinating to look through.

Applying Vaseline to the lens of her camera, using flash devices, oil lamps and infrared film, she created visual distortions, streaks of light, and saturated colours.

Claudia also developed a series of black and white portraits that capture the grace and dignity of the Yanomami. Focusing closely on faces and fragments of the body. She tightly frames her images. Using a dramatic chiaroscuro to create a feeling of intimacy and draw attention to individual psychological states.

By the late 1970s, Andujar had reached a turning point in her career

The construction of a transcontinental highway in the Amazon, initiated by Brazil’s military government, opened up the region to deforestation. As well as invasive agricultural programmes, bringing epidemics to the Yanomami and leading to the decimation of entire communities.

In 1978 Claudia founded the Pro-Yanomami Commission (CPPY, formerly known as the Commission for the Demarcation of the Yanomami Park), with the Italian missionary Carlo Zacquini, the French anthropologist Bruce Albert and the Yanomami leader Davi Kopenawa. Beginning a fourteen-year-long campaign to designate the Yanomami homeland.

At this point, Andujar put aside the artistic element of her photography to focus on using photography primarily as a means to raise awareness and support her cause.

In the early 1980s, Andujar took a series of black and white portraits of the Yanomami as part of a vaccination campaign. In the portraits, they wear numbered labels to help identify them for their medical records. The artist recalled how these numerical tattoos seemed similar to those Jews “branded for death” during the Holocaust. She later revisited these portraits and created the Marcados series, which reveal the ambiguity inherent in this act of labelling. Uncomfortable to look at, it was ultimately for their survival.

Andujar’s own father and paternal family perished during the genocide in WW2. This similarity deepened her commitment to the Yanomami struggle.

In 1992, following the campaign led by Claudia Andujar, Carlo Zacquini, Bruce Albert and Davi Kopenawa among many others, supported globally by Survival International. The Brazilian government agreed to legally demarcate Yanomami territory.

Claudia Andujar was born in Neuchâtel, Switzerland, in 1931 and grew up in Transylvania. During the Second World War, Claudia’s father a Hungarian Jew was deported to Dachau where he was killed along with most of her paternal relatives. Andujar fled with her mother to Switzerland, immigrated first to the United States in 1946, then to Brazil in 1955 where she began a career as a photojournalist, before becoming an activist. She currently lives in São Paulo.

Commentary from the experts:

Thyago Nogueira said: “Through Claudia Andujar’s art, this show tells the story of a collaborative fight that managed to protect the Amazonian Yanomami people from a massacre caused by economic greed in the 80s and 90s in Brazil. I am afraid to say history is repeating itself with Covid-19 moving quickly into Yanomami lands and the failure of the Brazilian government to react. If we don’t act, another major humanitarian disaster will take place here.”

Davi Kopenawa, Shaman and Yanomami leader said: “Claudia came to Brazil and the Yanomami lands, thinking about her project. Though not Yanomami, she is a true friend. She took photographs of childbirth, of women, of children. I did not know how to fight against politicians and non-indigenous people, but she gave me the tools to defend our people, land, language, customs, festivals, dances, chants and shamanism. It is important to me and to you to see the work she did and respect the Yanomami people of Brazil who have lived in this land for many years.” 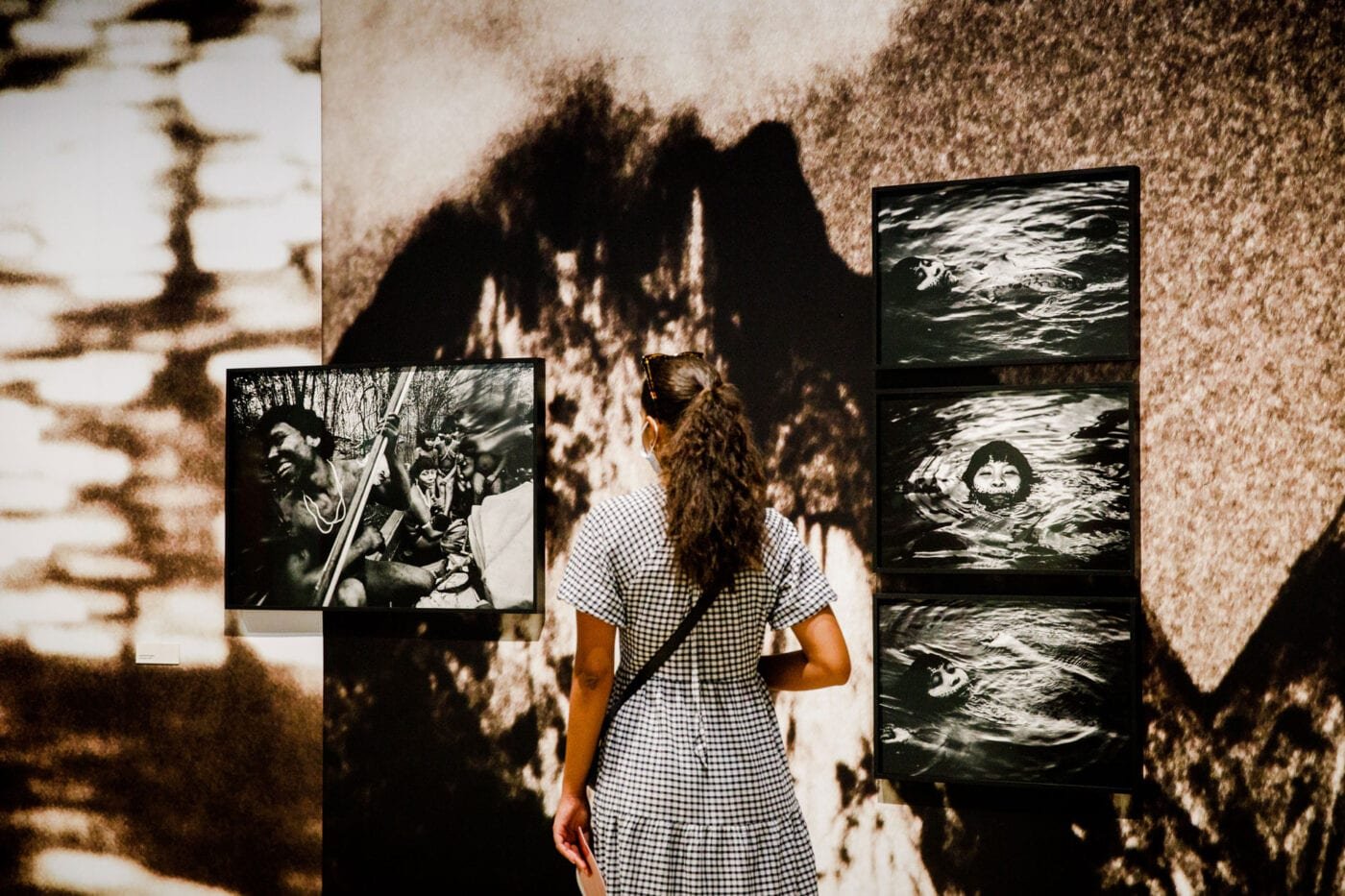 Review: Claudia Andujar: The Yanomani Struggle
Beautiful, thought-provoking & fascinating
The exhibition today really brought to live a life's work by the talented artist Claudia Andujar who is committed to the people of Yanomami. The juxtaposition between the infrared photography of the spiritual Shamen events and environment, versus the black and white series of intimate photos of the Yanomami really brings alive the fabric of the culture and existence of these people. You are invited to see into this world, and what is evident is that you are in a circle of trust, especially given that these people have allowed these photos only to tell their story to the world. Claudia documents this world intimately. Revealing the plight of the Yanomami people. She also captures an in-depth, emotive and intimate snapshot of the beautiful people who reside there in Brazil and the wonderful culture they are fighting to keep alive.
Reader Rating0 Votes