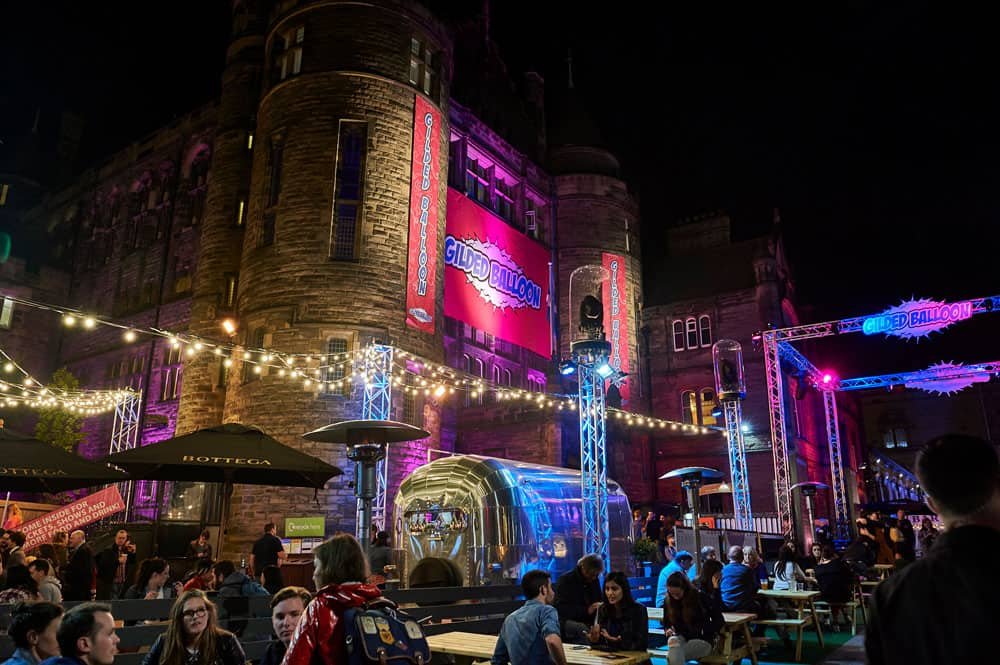 Make your lounge, loft or even your loo into a fringe venue this August by watching the Gilded Balloon’s Retro Fringe online.

Just when you’d given up all hope of any kind of Edinburgh Festival Fringe this year. Karen and Katy Koren have ventured into the Gilded Balloon archive and decided to introduce the world to some of its treasures. Along with all the wonderful reminders of Fringes past. Audiences will also be able to discover some brilliant new gems on the site. There will be new work from some of the performers who were due to be appearing at the venue this year. Chat shows from your favourite Fringe hosts and even the premiere of Search Party, a brand new cutting-edge treasure hunt around Edinburgh city centre.

From previous years Gilded Balloon will be showing footage of some of their best-loved regular shows including Greatest Ever Late n’ Live Shows with archive footage of some of the amazing artists ever to have set foot on the iconic Late n’ Live stage. Over the years these have included Dara O’Briain, Tim Minchin, Jimmy Carr, John Oliver, Flight of the Concords, Dane Baptiste, Russell Howard, Johnny Vegas, Adam Hills and many more.

In The Best Bits from So You Think You’re Funny? there will be the chance to look back at some of the memorable moments from the finals of the UK’s longest-running comedy competition for newcomers. The shows will be introduced by Karen Koren – whose brainchild the competition was – with clips from some of the country’s finest performers before they became household names. Previous finalists have included Aisling Bea, Sarah Millican, Kevin Bridges, Fern Brady, Tom Allen, Rhod Gilbert, Maisie Adam, Romesh Ranganathan, Nina Conti and Jack Whitehall. There will be a one-off Sofa Set List show featuring the best clips received throughout lockdown from names such as Jo Brand, Lou Sanders, Rosie Jones, Rich Hall and Jayde Adams.

Gilded Balloon Offstage is a new platform being launched by the company to host both archive and new content. Audiences will be able to access some of Gilded Balloon’s favourite comedy and theatre shows from the past including Andy Gray and Grant Stott’s sold out show Double Feature, Lewis McLeod and Ronni Ancona’s show Just Checking In and Gilded Balloon’s 30th Anniversary Show recorded at the Playhouse Theatre in Edinburgh. There will also be brand new work from some of the performers who should have been at the Fringe this August showcasing the best of a world of talent.

The hugely popular podcast Boss Wummin’ will also continue with Karen and Katy having drinks in the online lockdown Loft Bar with some of the Arts’ industry’s most amazing women including Rosie Jones, Maisie Adam and Thanyia Moore.

Fringe Search Party is a brand-new live interactive experience which will be piloted in August and run throughout the month. Gilded Balloon are partnering with Padlox Escape Rooms to bring this to life and it will be suitable for all the family. It’s a Fringe themed trail of puzzles, games and clues to solve around the City of Edinburgh in search of the legendary Spirit of the Fringe. Participants will visit some of the iconic Fringe venues and locations throughout the trail with the help of famous Fringe faces.

Teams of up to five can play for a registration fee of £10 per team. There will be an online scoreboard which will record the team’s finishing time and prizes will be awarded to the winners.

So You Think You’re Funny? Locked Down

Although this year’s So You Think You’re Funny? competition has had to be postponed. Gilded Balloon still wanted to continue to support the newcomers to the Comedy industry who are unable to gig and hone their craft at this time. So You Think You’re Funny? Locked Down will aim to provide this year’s applicants the possibility to be mentored by industry experts.  Whilst this won’t replace the huge learning experience of performing in front of a live audience. It is hoped that it will still offer these new performers a valuable opportunity to perfect their material and performance style.

The majority of the events and shows in the Gilded Balloon Retro Fringe will be totally free to watch. However, audiences will still have an opportunity to donate money through the site if they would like to. Part of any money raised will be used by Gilded Balloon to support their continued investment in the Fringe and events across the rest of the year. The remainder will go to the performers who are taking part in the programme, many of whom have lost their livelihoods for the foreseeable future.

“It would have been the Gilded Balloon’s 35th Fringe this August and during these hard times with no live entertainment we have looked back through our archives and found some entertaining footage for audiences to remind themselves of what we are all missing this August. We thought it might be a good idea to remind the world just how much joy the Arts can bring to our lives. Especially at that time of year when all its forms are concentrated together in the shape of the World’s largest Arts Festival in Edinburgh.  If you haven’t lived through a Festival, it is hard to explain how creative, joyous, busy and vital the month of August is.  It has to be seen to be believed but sadly not this year. The loss of this year’s Fringe has left a huge hole not only in our lives but in the lives of thousands of performers and other people who made Edinburgh their home for August.  This year we will try to remind ourselves of what there was and what we will bring back again in the future.”