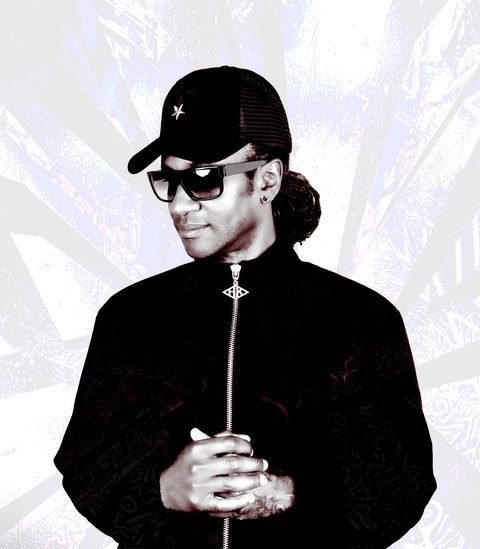 Fresh from a sellout UK Tour with The Prodigy, the artist and musician will exhibit paintings and
sculptures in the ‘Infinite Drama’ solo show.

As well as being known as a member of the award-winning band ‘The Prodigy’. Maxim is known for his haunting, mixed-media artworks that explore the darker corners of human nature. The exhibition is titled ‘Infinite Drama’, an appropriate description for the dramatic, powerful artworks, which draw on elements of the human psyche and dramatic world events such as troubling social issues, police brutality and war.

Maxim’s artworks all possess an element of drama combined with a hint of Pop Art. Fitting for a member of a game-changing rock band who emerged on the dance music scene in the 1990s before becoming part of popular culture. Known for his high-energy performances and explosive stage presence. The performing side of Maxim’s creativity has translated into his work, as a multidisciplinary artist whose musical product sometimes informs, yet is entirely separate from, his visual.

Miar Gallery Founder and Owner Irem Deniz commented: “Miart Gallery’s curatorial approach is informed by an awareness of historial and contemporary narratives and a dedication to shaping the contemporary art canon through presenting diverse and eclectic collections. We are delighted to host Maxim’s bold compositions that play with surrealism, dark humour and the complexity of an ever-changing modern society.“

Maxim’s ‘Infinite Drama’ solo exhibition will feature paintings and sculptures fusing influences of Afrofuturism and abstraction with hints of Pop Art and Surrealism. The result is a powerful body of work that comments on the darker side of humanity. The anti-police brutality riots in the US sowed the seed for Maxim’s sculpture ‘Balaclava Ballerina’ which is featured in the exhibition.

Maxim also looks to nature and the inner workings of the human mind as influences for his art, with a series of exquisite paintings (‘Therapy Green’, ‘Therapy Gold’ and ‘Therapy Yellow’) inspired by the Rorschach Test, a process where ink blot drawings of psychoanalysis subjects are psychologically analysed. The butterfly is a recurring motif in Maxim’s
artistic oeuvre, while the Miart London exhibition will also feature more tongue-in-cheek works such as ‘Rebel with the Paws’ – sculptures of gun-toting felines on their hind legs – a surreal metaphor for society’s rebels who spread positivity by shooting rays of love.

However, Maxim’s sculptures ‘Green Future X’, ‘Silver Future X’ and ‘Black Future X’, are actually associated with the Afrofuturist philosophy of a cultural aesthetic fusing science-fiction, history and fantasy. In order to explore the African experience and connect those from the black diaspora with their forgotten African ancestry. The term Afrofuturism is rooted in African American science fiction such as the writings of Octavia Butler and Samuel R. Delany, and the music of jazz musician Sun Ra, who created a mythical persona which combined Egyptian mysticism with Sci-Fi.

Maxim’s Afrofuturist masks capture a zeitgeist embodied by the Ekow Eshun-curated Hayward Gallery exhibition ‘In The Black Fantastic’. His influences can be linked to some of the artists featured there, such as Wangechi Mutu and Chris Ofili. Maxim’s interest in Afrofuturism is part of a legacy of artists and musicians with links to the philosophy, including George Clinton and film director Wanuri Kahiu.

‘Infinite Drama’ will feature ‘Balaclava Ballerina’, a mixed media painting and sculptures, which Maxim describes as “A Super-Heroine in a Balaclava. She carries two guns that spray rose petals over negative people which spreads positive vibes and love”. Maxim was moved to create the image after seeing a photograph in the media during the riots following the murder by a US policeman of George Floyd. He saw a female facing a group of police in riot gear. She looked so innocent and was no threat compared to the strength of the 30-40 riot police with shields and weapons that she was up
against. This led to Balaclava Ballerina.

Ethos of promoting love and equality

Maxim’s ‘Balaclava Ballerina’ and ‘Rebel Cat’ characters address the subject of standing up against something negative and spreading love and positivity in the face of social inequality. This ethos of promoting love and equality is also reflected in some of Maxim’s other artwork, which carries a strong sense of the toxic injustice that continues to permeate society. For example, many of his works include the ‘$’ symbol, which is pointing out the good and bad sides of money.

Maxim finds the phrase ‘Money is the Root of all Evil’ quite ridiculous – “It depends on how you use it. Of course, greed and selfishness can cause corruption and destruction. But so many good things can come from having money. People can be fed, clothed and opportunities created for the less fortunate.” Maxim’s artwork also reflects the fantasy world we all like to be a part of, which we see as escapism from the real world and is more playful.

Maxim has more recently become known for his creativity as a contemporary artist under the pseudonym of MM (Double M). He has been creating paintings, multi-media collages, and sculptures for the last 20 years. His art has been featured on various home goods, such as bone China and soon-to-be on candles, cushions, and wallpaper. He started to explore the visual arts after a trip to an art fair where he went looking for paintings for his house. Not impressed with what he saw, he thought he could do just as well, if not better, himself. He began by painting colour washes, creating abstract pieces that caught the eye of anyone that came to his house, who commissioned similar ones for themselves.

As a member of the hard-hitting dance music band The Prodigy, known for fierce lyrics and vibrant sense of style, in both their videos and their explosive live shows. Maxim’s artistry cannot be questioned. The Prodigy achieved global fame with the seminal album of 1997 ‘The Fat of the Land’ a moment that catapulted the band from a cult clubland crossover to a globally renowned dance-rock monster and newfound terror of the tabloids. The 2022 UK tour of The Prodigy coincided with the 25-year anniversary of ‘The Fat of the Land’ and was the first tour for the band since the tragic death of Maxim’s close friend and Prodigy bandmate, Keith Flint, in March 2019.