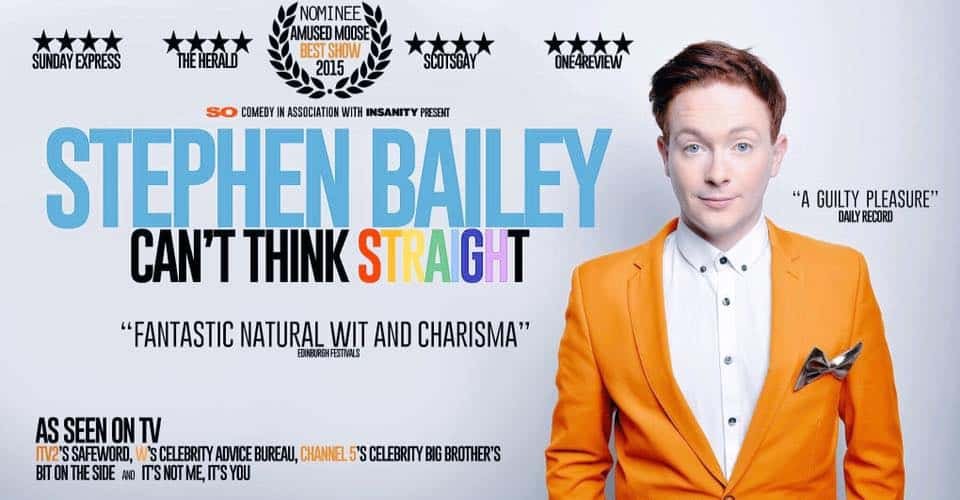 Stephen Bailey: Can’t Think Straight is the unmissable new stand-up show about illuminating your self-worth from a rising star who has found his voice and is finally feeling good enough. In his most honest performance to date, Stephen tackles everything from celebrity culture and dating to politics and working-class family life.

Stephen Bailey is a comedian, television personality and writer, whose friendly and open brand of humour has made him one of the most sought after acts on the UK comedy circuit. He is “annoyingly sharp” (The New Current) and audiences relate to his fun and sassy style as he takes to the stage with “fantastic natural wit and charisma” (Edinburgh Festivals Magazine). In 2015, Stephen was nominated for the Amused Moose Comedy Award for Best Show.

Having previously supported Katherine Ryan on her UK tour, 2017 has seen Stephen hitting the road with his debut tour Stephen Bailey: Nation’s Sweetheart as well as guest hosting Sunday Takeover on Virgin Radio and being named one of Attitude Magazine’s Top 100 Bachelors. A vocal supporter of LGBT rights, Stephen regularly contributes articles to Attitude magazine and the Huffington Post. He hosts Stonewall’s 25th Anniversary Party and his recent interview for AOL Build about the LGBT movement went viral.

You may also have seen him on TV! Safeword (ITV2), Celebrity Big Brother’s Bit on the Side (Channel 5), Celebrity Advice Bureau (W), Kate’s Wardrobe Secrets (ITVBe), It’s Not Me, It’s You (Channel 5) and he can be seen on CelebAbility (ITV2) this summer.

Broke Girl in the City articles:

Stephen has also contributed to our blog – see below.

‘He has charisma, he has his own style, he has a wicked line in material and the ability to go off piste with crowd work that is achingly funny’

‘Warm and affectionate but no less biting in its wit’