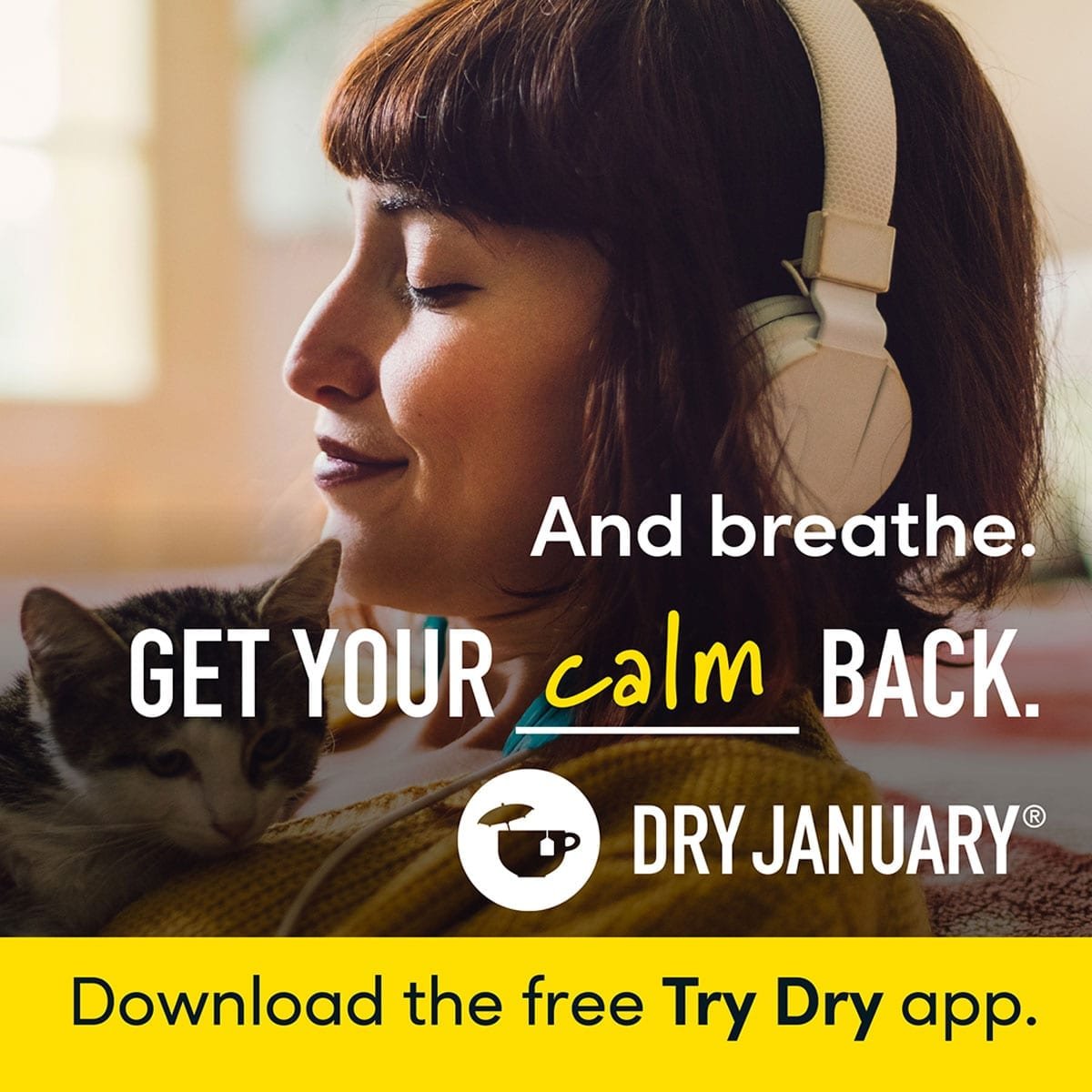 6.5 million people to do Dry January

• 1 in 5 of those who drink alcohol plan to go alcohol-free for 31 days in January, with 1 in 4
looking to cut down generally in 2021
• 1 in 3 say they have drunk more in 2020 than 2019, and 1 in 5 have felt concerned about the amount they have been drinking since COVID-19 restrictions began
• Those who take on Dry January using the charity Alcohol Change UK’s free Try Dry app or email
support are twice as likely to have a month totally alcohol-free

One in five (20%) people who drink alcohol are planning to take on Dry January this year, or 1 in 8 (12.4%) of all UK adults. This January an estimated 6.5 million will be going alcohol-free – up from an estimated 3.9 million last year.

Have you been drinking too much under lockdown?

New research from Alcohol Change UK, the charity behind Dry January, suggests that more people than ever are planning a Dry January to reset their relationship with alcohol after a year when many have found themselves drinking more heavily.

Research has consistently shown that many people are drinking more heavily since the COVID-19 pandemic and associated restrictions began earlier this year. This new research finds that close to one in three (29%) people who drink alcohol say that they have drunk more in 2020 than in 2019. One in five (22%) have felt concerned about the amount they have been drinking since COVID-19 restrictions began in March this year. A similar proportion has found themselves drinking earlier in the day (26%), drinking more often (31%), and drinking ‘to try and cope’ (23%).

Not all of our experiences of the pandemic have been equal

One in three (31%) increasing and high-risk drinkers – those drinking more than the 14 units a week the maximum recommended by the UK’s chief medical officers – are planning to take on a Dry January, compared to one in seven (15%) low-risk drinkers, confirming existing research which shows that the challenge is most popular among those who stand to benefit the most.

Evidence shows that Dry January is an effective and lasting way to cut down; research by the University of Sussex published in 20204 found that 70% of those taking on a Dry January are still drinking less six months later – but interestingly this only applied to those who did the campaign with support from Alcohol Change UK, via their free Try Dry app or coaching emails.

Think how much money you will save by not drinking this month!

“I am signing up to Dry January. It’s a way of resetting after a tumultuous year” – Marie (Aka Broke Girl in the City)

“2020 has been a year like no other. Many of us have spent the year stressed, scared and tired –
it’s no wonder that many of us don’t feel much like ourselves. When things get tough, we can find
ourselves slipping into drinking habits we wish we could break – but Dry January can help. It’s our
chance for a reset. 31 days to try something new, and to see some amazing benefits like brighter
skin, a fuller wallet, a calmer mind and a better night’s sleep.

“Dry January isn’t about stopping drinking forever, but it is about more than January. It’s about
learning that you don’t need alcohol so that for the rest of the year you’ve got a real choice. It’s
about making 2021 the best it can be, and we deserve that now more than ever.
“It’s all too easy to bury our heads in the sand when it comes to our drinking. Our new research
shows that one in three (30%) of those drinking at increasing- or high-risk levels believe they don’t
need to do Dry January because they drink ‘healthily’ – even though the number of units they
drink is putting their health at risk. That means millions of people are putting their health at risk,
but either don’t realise or don’t want to believe it. The new year is a great opportunity for us all to
reassess our drinking.”

“If you’re doing Dry January, please do it with support. Alcohol Change UK offers brilliant free
resources to help you make the most of your 31 days dry. By downloading our app or signing up
for coaching emails, you double your chance of having a totally alcohol-free month and getting
the amazing, lasting benefits Dry January can bring.

Download the FREE app & track how much money you save!

Alcohol Change UK offers a free app, Try Dry, which allows people to track their units, calories and
money saved through Dry January, and to set custom goals for managing their drinking year-round.
The charity also offers daily support emails throughout the month. Those who take on Dry January
with this support are twice as likely to have a completely alcohol-free month compared to those
taking on Dry January alone, and have significantly improved wellbeing and healthier drinking six
months later.

Download the free app Try Dry: the Dry January app via the App Store or Google Play. Via the app,
you will be able to receive optional daily coaching emails.

Amanda, aged 46 from Worthing, took on her second Dry January in 2020, and she credits it with helping her to manage her drinking throughout lockdown:

“In 2019 I did Dry January for the first time. I managed to keep my drinking on track for half the year on and off, but by Christmas, I was ‘enjoying’ myself way too much. I had started cracking open the wine at 4 pm while I was cooking and on Christmas day I noticed I was the person drinking faster than anyone else (again…)

“I knew it was time to stop. All the signs were there – poor sleep, feeling bloated, exhaustion, guilt, headaches, the feeling one glass was never enough, sweats, and hormonal imbalance. On 1 January I committed to Dry January, not even realising the spectre of COVID-19 was looming just around the corner.

“I knew what to expect. I tried not to focus on what I was missing, but to wait for the benefits
to arrive. It was up and down: after a very hard first few days of headaches, poor sleep and
more I felt great on day 7, swiftly followed by a slump on day 10. But on day 16 I had a surge of
energy and positivity. The good stuff had arrived!

“Was I tempted to drink? YES! Did I crave wine on occasion? YES! But the second time around, it
was easier to ride the waves and find alternatives. And with some strategies firmly in place, I
decided to continue beyond January.

“Then COVID-19 hit! Suddenly I was required to be a working mother, good wife, and teacher
to my children. Mentally it was tough. The pressure of being together all the time, the sense of
entrapment in our own home, seeing our kids develop very real anxieties about germs…
Having my drinking under control during COVID-19 saved me.
Not drinking has been the most positive and effective action I have ever taken for myself.”

Stopping drinking suddenly can be very dangerous and can even kill you. After a period of drinking, if you experience any of the following symptoms (seizures, tremors, hallucinations), you may be dependent on alcohol and you should NOT suddenly stop drinking completely. Speak to a GP who will be able to get help for you to reduce your drinking safely.